In the previous post we read about how to pull and run a container with single RUN command. Here we will see how to build a container from scratch, perform operation on that container and push our container to docker hub.

Before we dive deeper, we need to understand that container is only runtime instance of a Image. And same image can be used to create multiple containers.Also, Each container is identified with a unique Container ID.

Commands to perform operations on Continers

Docker container is formed when we create a runtime instance of Image. Here is life cycle of a docker contianer 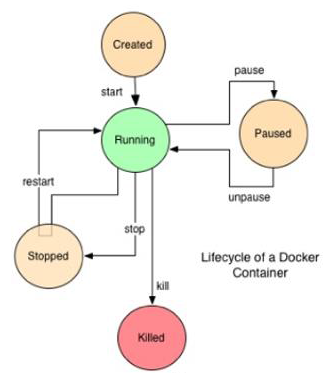 Go inside a Container (attach to a container)

Top processes within a container

Check stats of a container (CPU/mem)

Kill processes inside a container

Building you own Docker Images

There are tonnes of images available on Docker HUB but you can always create your own image and then push it to docker hub.

Docker images are always created with a file called Dockerfile (D capital). You can have docker file in any directory of your system but your docker file will be stored by docker daemon in your local docker registry.

For now we will see how to build a Docker Image with Dockerfile. CD to the directory where your Dockerfile is stored and fire the build command (-t used to tag the image with the name dockerImage)

Now that we have created our image in local registry, we will upload it to the Docker HUB so that it is available on the cloud

There is a notation for all the images present on dockerhub – username/imageName:tag

Finally we will push our image to Dockerhub

Now if somebody wants to run our image in their system, they just have to execute run command and our docker image will be first pulled and then run into the system

That’s all for the basics of docker, the next articles on docker will talk about some advance processes we can do with docker.

One thought on “Docker Container : How to build and basic commands”